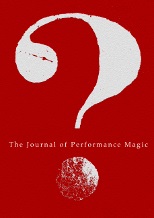 On Halloween — appropriately enough — my paper, ‘(Re)Discovering the Body in Mentalism’ was published under my former stage name Edward James Dean, in the University of Huddersfield’s Journal of Performance Magic. Regarding his paper, the editor of this edition, Madelon Hoedt, writes:

‘In “(Re)Discovering the Body in Mentalism” by Edward James Dean, the author discusses the role of the body in the performance of mentalism, or rather, the perceived lack thereof. As Dean argues, the performance of mentalism, in particular, is seen as an activity of the mind, first and foremost, foregoing any notion or interpretation of the physical. In his essay, Dean is opening a discussion as to how the body of the mentalist needs to be reassessed in order to create a different, and perhaps more effective, type of performance.’

To read ‘(Re)Discovering the Body in Mentalism’ click here