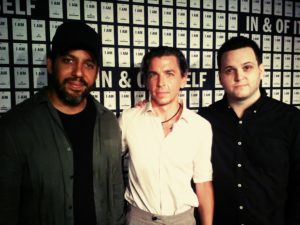 In Marrakesh I once wandered hopelessly through the labyrinthine Souk vainly searching for my hotel. I asked a young vendor about the address and was handed off without delay to an elderly gentleman who led me through twists and turns for what felt like kilometers leading into days. Just before turning a corner, plainclothes men on motorcycles holding radios arrived and the man disappeared into the twists and turns of the Souk. They claimed to be police and led me the rest of the way to my hotel, which was just around the corner. The desk clerk spoke as much English as I spoke French. It was his first day on the job and he didn’t know how to book me into my room. I would need to wait for “his friend” to return. The old man who fled from the police reappeared with his hand out. I gave him what I considered to be a generous tip by local standards. He wanted more. Sorry my friend, not tonight.

Amidst all this frenetic activity poised on the razor’s edge of chaos, a melodious voice coming from the staircase behind and above me, with all the nuances of a classical James Bond villain, pleasantly proclaimed in the comforting accent of an elderly New Yorker, “Welcome to Marrakesh…” At breakfast the next morning, we exchanged a few pleasantries. He was in his seventies. The following morning I sat in a dark corner for privacy. He asked if he could join me. Forcing myself to be social, I asked questions and he laid out one of the most fascinating life stories I’ve ever heard. I still follow his travels and I hope that I age as gracefully as he has. What prompted me to recall this memory and describe it with such melodramatic prose at 3am? Oh, it’s just that a driver shortage has left me stranded in a Greyhound Bus terminal in Columbus on my way to New York and the lady just said, “Watch your step, you’re steppin’ in blood.”

I finally arrived in New York City, hours after the show began which I traveled there to see. But I am happy to report that I was able to switch my ticket to two nights later, and also that I have lovely friends who have a couch. I saw Derek DelGaudio’s show ‘In & of Itself,’ which was brutally good. I expected to be impressed with the theatrical experience. I did not expect to stumble out of the show muttering to myself that Derek must apparently be able to do real actual magic, because that’s the only answer that goes any distance toward explaining some of what I saw. After the show, I spent some time backstage with Derek and David Blaine. (I’m not even going to tell you who’s holding the camera…) We discussed being real and feeling fake and everything in between, and Derek eloquently summed it up: “Welcome to the crisis.”